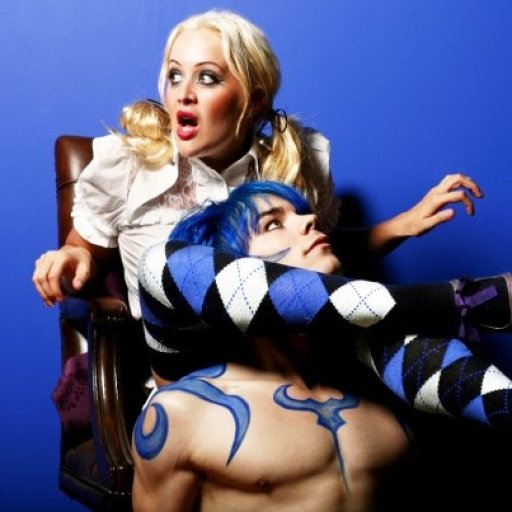 Read Full Stats
Stats
PROFILE VIEWS: 3260
Contact   Joined November 08, 2009
Biography
<p><span style="font-family: 'lucida grande', tahoma, verdana, arial, sans-serif; font-size: 11px;">Bad Pollyanna are an overtly...
Read Full Biography
Biography
<p><span style="font-family: 'lucida grande', tahoma, verdana, arial, sans-serif; font-size: 11px;">Bad Pollyanna are an overtly theatrical pop/ rock song writing duo that consists of multi talented singer, model, fire artist, burlesque dancer and all round exhibitionist Olivia Hyde and, hailing from Finland, classically trained and rather eccentric bassist Nikki Kontinen.<br /><br />Although Olivia and Nikki have been writing music since early childhood both freely admit that it is when they come together that the magic really happens. Influenced by filthy pop, dramatic industrial metal, gloriously decadent theatre and even eastern genres Bad Pollyanna's dedication to producing powerful and unusual music will always be their first priority. However, the visual aspect of the band comes a close second. Even before a song has been completed Olivia and Nikki' s imaginations are running riot with how the song's music video will look, what kind of imagery might be used on the CD if the song should be a single and, most importantly, how it will be presented on stage.<br /><br />With co-founders who are so passionate about visual theatre their live show couldn't have been any other way. Where the venue allows Bad Pollyanna delight their audiences by using fire artistry, angle grinding, aerial displays and performances that often push boundaries of normalcy and decency- well Olivia isn't called 'Bad' Pollyanna for nothing. The band's charismatic frontwoman makes no secret of the fact that she lives out her fantasties as well as cathartically facing her demons in her music and lyrics...<br /><br />Indeed, the name of the band came from a nickname of Olivia's- one which sprung from her positive and light hearted approach to life combined with her unapologetic fascination with erotica, fetish, provocative fashion and the alternative lifestyle. For more about where the band name came from and how it relates to their art please see the FAQ section.<br /><br />Perhaps the most interesting thing about this fascinating band is how they came about:<br /><br />Having been in and out of various projects for some time Olivia and Nikki decided to form their own band where they wouldn't have to compromise their ideas. Despite their music being simply bass and vocals at this point the songs were put on a myspace profile so that the pair could begin to find musicians who shared their tastes. Within four weeks the band had been invited to Los ANgeles by an experienced producer and his Grammy Award winning engineer to record a demo at the world famous Henson Studios in the heart of Hollywood. Then with money raised from Olivia's singing school (link below), Nikki's session work (link below) and a small loan they got on a plane to California. Using some of Los Angeles' finest session musicians (including Kelly Osbourne's guitarist Mat Dauzat who continues to work with the band), Bad Pollyanna made their first recording. Within three months the band had filmed a music video, set up their own record label and unleashed their unique brand of theatrical, industrial pop rock upon the world.<br /><br />Not bad for a couple of musicians from Leeds!</span></p>
Rating