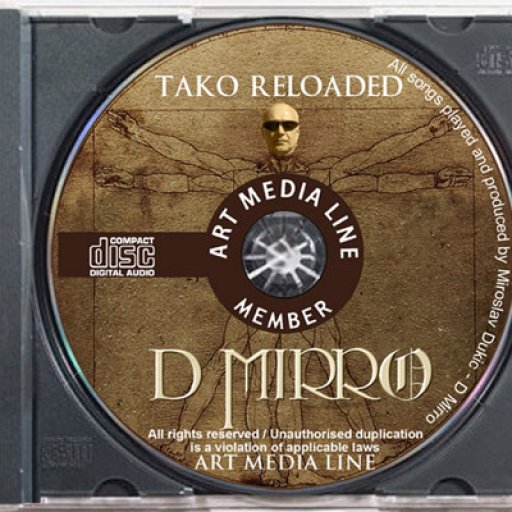 Read Full Stats
Stats
youtube videos: 3
audio tracks: 1
PROFILE VIEWS: 4557
Contact   Joined September 27, 2011
Biography
<p>1953 Miroslav Dukic D Mirro born in former Yugoslavia. 1972 after High Scool started to play guitar with friends from Scooll.Very soon he started to...
Read Full Biography
Biography
<p>1953 Miroslav Dukic D Mirro born in former Yugoslavia. 1972 after High Scool started to play guitar with friends from Scooll.Very soon he started to play with semiprofessionall and professional musicians. After time in Army ,he was a leader from band Koren and after one Rock fest play one blues song on the LP with the best bands. Year 1976 started to play with Dusan Cucuz and Djordje Ilijin in band TAKO. TAKO literally means "This way" and the name of the band symbolises the basic principleof music concept.Band didn't want subordinate own music to demands of the mass medias, and wanted it to express feelings and musical tastes , exactly like words "this way". The band TAKO started after Dusan Cucuz..bass player met George Ilijin..keyboard , flute and harp in spring 1975.They two already had some compositions , wich introduced to each other. During 1976, after first line-up of TAKO the new guitarist,Miroslav Dukic , was exactly the right man for the group , but the drummer's post was more or less vacant until in 1977 Slobodan Felekatovic came.The new members in this definitive formation were new sources of inspiration , and the whole thing became more and more serious.Now band has all-day long rehersals , with the Fender-piano serving as lunch-table during the break.This line-up first appeared at the concert in the hall "Pinki" together with the most famous bands in town.TAKO was completely different from the other bands and made a good impression on public and critics.Durring the year band travelled to gigs every weekend with one old WV-van.After a very good performance on the "Belgrade Summer Festival" in "Youth Center"TAKO played in front of 100 000 people in open-air concert as a forerun of band "BIJELO DUGME" who was at the peak of its enormous popularity.After that band played as a forerun on their tour in big stadiums and halls in front of thousends of people. Then came" BOOM 77" the big rock-festival in NovI Sad; November 1977 band "TAKO" organizied, together with "S Vremena Na Vreme", the first quadro-experiment in Youth Centar in Belgrade. Alt those events, and the good critics band got, contributed to create a flair of a cultband. But for the record companies we still weren t "comerciall" enough. Nevertheless, TAKO went on persistently and played our first solo concert in the big hall of the SCC (Student Cultural Centre) in Belgrade - and RTB and RTV Ljubijana started to show interest. Appearance on the Youth Festival in Subotica brought the first LP-contract with RTV Ljubijana. The material for this album was recorded and mixed in "Studio M" off Radio Novi Sad in only 36 hours. Thanks to the agility of the people In RTV Ljubijana, the record was released only two weeks after the recordings done. TAKO decided to celebrate this by giving a free concert on the Kalemegdan, the ancient Belgrade fortress, and that was also the promotion of the record. 5.000 people came and showed that we already had cut audience. With this first LP band paid more attention on radio and TV, but live appearances re&shy;mained TAKO favorite field of expression. Concerts were meant for those who wanted to hear something unusual. One of the best concerts was the one in "Studio M"in Novi Sad, when the public stood and applauded for a long tine after the gig was over, and the radio-station broadcasted the whole event. TAKO musicians were already well known to the public when we appeared on "BOOM 78". In spite of all that, many of the critics were reserved and many Just not interested in us because "Tako" never intended to buy their sympathies and didn t listen to their "wellmeant" advices to play more commercial music. Only the sincerity of TAKO music counted, and that s what the audience on concerts could feel. The next year, 1979, was quite bad for band. TAKO was in the middle of the preparations for -the second LP when Djordje got ill of artritis. He went to the hospital, and-the pressure in the band grew stronger. After some discrepancies between MlrosIav and the rest of the band, he quitted and formed his own group. The rest of the band tried to find a replacement. But it didn't last long and Miroslav came back, the band was together again and new ideas, and everyday rehearsals marked the next period. Disappointed with the complete approach and the manners in state studios, band decided to make the recordings for the second LP in Enco Lesic a "private" studio. TAKO cooperated with Enco and his engineers much better, musicians given enough time and the whole atmosphere was more pleasant and relaxed. The tracks were first offered to PGP RTB, who didn't wan't. make the same mistake as for first album off TAKO, and signed the contract with band. LP "U Vreci Za Spavanje" ("In The Sleeping Bag")was born! However, to finance the studio work band had to play during the whole summer at the Adriatic Coast. "U Vreci Za Spavanje" ("In The Sleeping Bag&quot

appeared in September 1980. The promotional concert took place on the 8.9.1980 in Youth Centar in Belgrade. Until the end off the year TAKO gave a number of concerts, appeared on the radio and recorded for TV-emissions. At the beginning of 1982, band had a unique occasion to take pert in a big YU-rock action: the bands from Belgrade gave concerts in Zagreb and their Zaqreb colleagues returned the visit .TAKO had a remarkable performance and got a very good reaction from the public,but were almost ignored from the critics, who at the time turned their radars to punk and new wave. The general change of style in the YU-rock scene, as well as TAKO drummr's military service, were the reasons for TAKO musicians to decide to give one last concert at the Faculty of Philosophy in Belgrade and to say goodbye to the public. Slobodan went to the army, Miroslav worked as producer and recording engineer, Djordje was teacher, ethnologist in a museum and than recording engineer. Dusan supplied gigs in Belgrade and whole of Yugoslavia with hes sound equipment. Ten years after we had stopped our active work as a rock-band, Thomas Werner, a collector and amateur of the "Seventies" YU-rock scene appeared in Belgrade. He visited Dusan and me (Miroslav D Mirro), (George was in New York) several times and after a while proposed to reissue both of our albums on his "Kalemegdan Disk" label. It was a great chance for TAKO musicians to present their music.Ten years later, the way how TAKO musicians always wanted to; pressed from a better matrix and using the original cover ideas. For that reason Mlroslav, Slobodan and Dusan accepted Thomas ideas. Band allready had the second master-tape in their possession and the first one was found in the archives of Radio Novi Sad and had to be bought out with some "slight" complications. The order of the songs was changed and the first album got one more track ("Put iii Jug"/"Journey to the south"), the second even two: ("Izgubljeno nista"/"Lost nothing" and "Horde Mira&rdquo;"/"Hords of Peace"). At the end of May 1992 Thomas left for Germany with the complete material for both records. .....................................................................................to be continued on "D Mirro Story".</p>
Rating