album: On The Funky Side
genre: Jazz
streams: 30 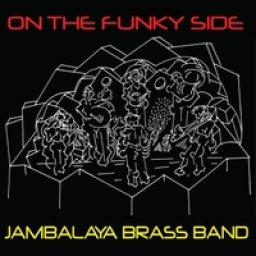 Read Full Stats
Stats
images: 4
audio tracks: 4
PROFILE VIEWS: 10319
Contact   Joined January 13, 2011
Biography
<p>&nbsp;</p><p>If you find that your musical and cultural diet has felt a little bland lately and been wondering where you might spice...
Read Full Biography
Biography
<p>&nbsp;</p><p>If you find that your musical and cultural diet has felt a little bland lately and been wondering where you might spice it up, well search no more&mdash;you won&rsquo;t want to miss the master musical chefs of the <strong>Jambalaya Brass Band</strong>!&nbsp; These seasoned New York purveyors of authentic American &lsquo;roots&rsquo; music play a delightful spicy musical gumbo of New Orleans fare from the likes of Jelly Roll Morton and Louis Armstrong, to the Rebirth and Dirty Dozen brass bands, to the heights of their own modern sounds which incorporate elements of R&amp;B, Gospel, Funk, Zydeco, Latin, Hip-Hop and Be-bop.&nbsp; This tight and tasty ensemble is the ultimate New Orleans party band, which is amply demonstrated on their latest CD release <strong><em>On the Funky Side</em></strong>.</p><p>&nbsp;</p><p>From the Warner Bros. film, <em>Where the Wild Things Are</em>, to the Britney Spears Super Bowl Party in New York City at Planet Hollywood, to the half-time Mardi Gras show for the New York Knicks at Madison Square Garden, Jambalaya Brass Band has literally made the party.&nbsp; They&rsquo;re a group of seasoned musical pros from a variety of impressive previous musical settings as diverse as the Duke Ellington Orchestra, to Ray Barretto, to the Lounge Lizards, yet they have a knack for integrating these disparate musical experiences into one dynamic setting.&nbsp; These talented musical revelers embody the history of the best American music of the last hundred years while at the same time suggesting a prescient trajectory of America&rsquo;s musical future.&nbsp; Jambalaya Brass Band&rsquo;s arrangements are sometimes traditional, and many are original and innovative while the playing is simultaneously precise and spontaneous, yet all is conceived with imagination and wit.&nbsp; Because after-all, this is New Orleans party music and, if anything, the Jambalaya Brass Band is a joyous musical celebration as they have proven on many occasions.&nbsp; More recently, the band has performed the music for two Southern Comfort commercials and a Ritz Cracker ad, at the funeral for the &lsquo;old&rsquo; Coney Island, at d.b.a. New Orleans, at the Mermaid Parade and B.B. King&rsquo;s in NYC, as well as many colleges and other concerts around the country.</p><p>&nbsp;</p><p>Jambalaya&rsquo;s foundation is provided by Chauncey Yearwood&rsquo;s bass drum and cymbal; Kevin Raczka&rsquo;s snare drum and cymbal; and Ralph Hamperian&rsquo;s tuba&mdash;and this rhythm section <em>cooks</em> with a flavor as driving as it is tasty!&nbsp; Filling out this rich gumbo and adding the spice on top is the trombone, vocals and percussion of Curtis Fowlkes; the trumpet, vocals and percussion of Steve Gluzband; and the tenor sax, vocals, percussion of leader and founder Ric Frank, an alumnus of the Duke Ellington Orchestra. &nbsp;In addition, the group is commercially flexible and viable in that they can provide a unit of five to nine players in a live setting&mdash;and what accomplished players these guys are!</p><p>&nbsp;</p><p>Like<em> It&rsquo;s a Jungle Out There</em>, their previous CD, <em>On the Funky Side </em>is a rollicking musical journey and a great celebration of American music while at the same time an appetizing preview of what this group is capable of live.&nbsp; Playing <em>On the Funky Side </em>at a party is a sure bet, and seeing these talented players live really brings the party directly home to you.</p><p>&nbsp;</p><p><em>"</em> <em>Jambalaya could stand side-by-side with most any New Orleans brass band in terms of sheer exuberance and energy . . . a party from start to finish."</em>&mdash;<strong>Henry Smith for <em>All About Jazz</em></strong></p><p>&nbsp;</p><p>The Jambalaya Brass Band currently resides in New York City.&nbsp; Visit them on their website at <a href="http://www.jambalayabrassband.com">www.jambalayabrassband.com</a></p><p>&nbsp;</p><p>Contact:&nbsp;&nbsp;&nbsp;&nbsp;&nbsp;&nbsp;&nbsp;&nbsp;&nbsp;&nbsp; Janet Castiel, Redwood Entertainment, Inc. (212) 543-9998</p><p>&nbsp;</p><p>&nbsp;&nbsp;&nbsp;&nbsp;&nbsp;&nbsp;&nbsp;&nbsp;&nbsp;&nbsp;&nbsp;&nbsp;&nbsp;&nbsp;&nbsp;&nbsp;&nbsp;&nbsp;&nbsp;&nbsp;&nbsp;&nbsp;&nbsp; <a href="mailto:info@RedwoodEntertainment.com">info@RedwoodEntertainment.com</a>, <a href=&quot;http://www.redwoodentertainmentinc.com">www.redwoodentertainment.com</a></p><p>&nbsp;</p><p><strong><span style="text-decoration: underline;">&nbsp;</span></strong></p><p>&nbsp;</p>
Rating