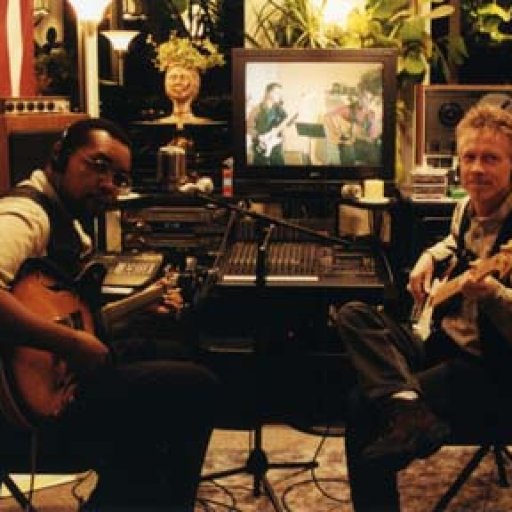 Read Full Stats
Stats
youtube videos: 10
audio tracks: 10
PROFILE VIEWS: 18602
Contact   Joined March 25, 2008
Biography
"We believe our songs give our listeners and supporters the feeling of having something that is theirs, that's not a part of everybody else's world," says...
Read Full Biography
Biography

"We believe our songs give our listeners and supporters the feeling of having something that is theirs, that's not a part of everybody else's world," says Alex Oliver, musical director for Poppermost.

Described by music fans as "early R.E.M. meets early Beach Boys at a Queen concert" and "pop vocal band America meets the Ramones," Poppermost is an indie pop / rock music creation based in Las Vegas, Nevada, USA.  Originally an acoustic pop duo, Poppermost is now the original music division for TriPops Productions, a combination of Oliver's record label and publishing, and Trimordial Studio Las Vegas which is owned by the other half of Poppermost, Roy Rendahl.

The eclectic, diverse pop rock songs on their 4th full-length album, By Your Inspiration , were inspired by the winning essays from the Poppermost "Especially For You" win-your-own-song contest.  While the collection of songs will ultimately be released on one disc, it is currently being released gradually as a four volume series of EPs.

The contest was simple -- every month for one year, Poppermost posed different questions to their listeners and friends via email, the Internet, and their website.  Based on the "best answer" for each month's question (i.e. "who was your first love," or "who is the most inspiring person you know"), Poppermost would pick a winning essay each month and, as a prize, create a "personal musical valentine" for the essay writer.

"The contest was our way of saying thanks to our listeners and friends, who we call 'the different.'  They have supported and inspired us for over ten years now," says Oliver.  "Love like that you can't really pay back.  The best of what we have to give back is in our music.  They believe in us, and we do our best to entertain them through song."

By Your Inspiration also represents a personal best for the team of Oliver and Rendahl, both of whom man all the musical and audio switches.  In addition to regular single releases, new songs for the contest had to be written, arranged, performed, recorded, and mixed each month.  Turns out, it was a really fun, and trying, challenge for the duo.  "The songs were recorded during the first wave of the economic downturn.  Jobs were scarce, and all we had at one point were time and these songs to write and polish for our supporters.  By the grace of their inspiration, it was great therapy."

Starting out as a duo on July 4, 2001, singer / songwriter and multi-instrumentalist Alex Oliver joined forces with bassist and audio / graphics guru Roy Rendahl and freed themselves from a budding garage cover band in order to write and perform original music.  During the next 5 years, their  expanded versions of the band turned in blistering live performances.   They have released 3 other full-length CDs (the mellow acoustic self-titled debut, the daredevil power pop of Absolutely Sonic , and the shimmering retro pop / rock of Bitter Suite Swan Songs ) plus numerous CD singles and extended-plays, which quickly became "must-haves" for flocks of indie pop music lovers all over the world.

Even after officially saying goodbye to live performances, they continue to earn airplay globally on commercial and Internet radio, as well as earning great reviews from the press and supporters.   "Fi rst and foremost, we believe in writing and creating music that people will enjoy and remember.  In our case, we don't feel we need a typical band situation to accomplish what we need to do."   In addition to writing and producing their own original material, Oliver and Rendahl have branched out to assist indie musicians world-wide in arranging and recording their own music.  Thus, TriPops was born.

Poppermost has been voted Best of Las Vegas 2007 by the Las Vegas Review-Journal and listed as one of "Our picks for the best bands" in Las Vegas Weekly 's annual music issue.  Poppermost is determined to "capture ears, one song at a time" as the band continues to increase its radio and Internet presence.  As Jarret Keene of LV's CityLife says, "Can’t stop Poppermost!"  No matter where the journey takes them, or in what form, the creators of Poppermost are working to make their own significant mark on pop music history.

The Poppermost name originates from the early Beatles' inspirational call and response, "Where are we going lads?... To the toppermost of the poppermost!"